Breakfast is the most important meal of the day…

Now whoever said that probably didn’t mean for me to eat double the intake to try and guarantee I had a grandiose style day.

There’s a cost-reducing initiative at my company so getting off the boat and checking into the hotel – I had to double up with Bryan just for the night.  There was a moment of panic when we walked into the room and saw this:

We just laughed at that point but I think we were both glad when we realized the beds could be pulled apart.

I’ve been working nights and the boxing’s taken its toll so as soon as I showered and sat in bed, I pretty much blacked out.

When I woke up I just lay in bed… window wide open, fresh air blowing in – plugged in my headphones and listened to some music… I thought about my wife, my dog, the boxing… just being home again – had a big smile on my face.  I went down for an early breakfast and just left Bryan sleeping with the room to himself.  Gotta give a guy his privacy.

[…sorry yeah I was just getting onto that!…]

I’ve been reading other people’s blogs and I found a few good ones to follow including John Grimshaw, a guy training for an amateur charity boxing bout in 5 weeks.  It’s under the UK company Stealth UK Boxing.  StealthUK do these white collar boxing events where amateurs and beginners train for X-weeks and then they get to fight someone of equal ability.  They get the full arena-style experience and all the tickets that get sold, go to charity.  Sounds pretty awesome I have to say and I’m more than envious.  He’s got 8 weeks to lick himself into shape and he (and his wife) have my heartfelt admiration.  Training that intensely can take you away from the things and people you love and it’s never easy on your ties.  So if you’re reading this John, here’s to you, Mrs Grimshaw and baby Grimshaw.

There’s nothing like a deadline to keep you focussed either.

I’ve been boxing since April which puts me around 8 weeks but one day when my trainer Gary thinks I’m ready, I may look for something like this.  John’s bout is in Middleton, Manchester which is a little out of my way (me living in Scotland) but I’m not ruling out any part of the UK.  That’s the whole Musha shugyō thing again.

It’s not just about boxing or even health and fitness 🙂 … whatever you’re training in or whatever goal you want for yourself keep going for it and when you’re tired and strung out… just try to remember why you began in the first place.

As for me… well right now, I’m just looking forward to returning home.  I’m going to take a couple of days off this week and then I’m going to start training again.  Nothing too strenuous.  4-5 km runs and a bit of bag work.  That will shave my weight back down to 73 to 74 kg and in the second week, I’ll be back inside Lusby’s gym.  Back with Gary, back to my training and back to business.

There are all kinds of people in the blogosphere and the rest of the world – with their own goals, heartache and personal motivations. I’ll try and say a prayer for all of you.  Love you all. – Southpaw Swan

Musha shugyō (武者修行?) is a samurai warrior’s quest or pilgrimage. The concept is similar to the Chinese Youxia, or Knight Errantry in feudal Europe. A warrior, called a shugyōsha, would wander the land practicing and honing his skills without the protection of his family or school.

So I had another look at (ExpertBoxing) Johnny’s minimum requirement list for becoming an amateur boxer the other day and stared at the “Hit the heavybag for 15 minutes continuous” and I thought to myself.  That’s surely something I can do now.  So I updated a couple of pages on the blogsite with the intention of heading down to the gym to confirm it.  My training’s becoming a little monotonous after 3 continuous weeks – always drills in rounds of 3 minutes so a 15 minute non-stop exercise could be just the ticket to freshen it up.

I went on 3.5 mile run (5.5 km) to warm up first on the tredmill. My left knee didn’t feel 100% but I pushed through taking the usual 30 minutes.  Had a panic attack at 20 minutes when it felt like the run was more strained than usual.  Have I put on weight? Have I lost some stamina? That kind of stuff goes through my head but I knew it was my knee.  I should have cut the run short but I can’t reconcile in my head that doing something like stopping isn’t giving up.  Something to do with my own stubborness and compulsive thinking as well.

Now when you look at it on paper, 15 minutes continuous doesn’t seem like a long time  and maybe it isn’t but from the time you actually begin… it seems like forever.  The biggest problem wasn’t my arm or shoulder endurance – it was all the mucus and sweat building up.  Stuff that, normally, I would just towel, snot up, spit away into a bucket after 3 minutes I had to keep inside me and it was seriously putting me off in the final 5 minutes.

When I heard my buzzer go off I ran straight to my bucket and blew out all the crap from my nose feeling happy.  I still can’t understand people who prefer to go to the gym in pairs or multiples.  It’s not exactly the best projection of yourself caked in sweat, blowing bodily fluids out of your upper orifices.

Now Johnny never mentions what kind of continuous hitting the 15 minutes consists of but I did a mixture of hard and light shots and I was moving around the bag.  I don’t think I ever stopped throwing for more than 2 or 3 seconds and I could still keep my hands up to guard my face which I think was the general idea.

Those two are massive steps.  I don’t mind laughing at myself or making a fool of myself now and again, that’s part of life and good for the soul but I want to give a good account of myself.

I have this romantic daydream that one day I visit some other boxing schools around the east and west coast of Scotland and just spar a few rounds with some of the locals.  The Japanese have a word for that: musha shugyō… when you travel outside your home to train. Then, you return one day and you bring back that experience with you so that it enriches your own school.

When I was around 11 years old I was eavesdropping on one of my dad’s conversations to a neighbour.  I was young but old enough to remember the conversation.  He mentioned that he felt being a parent and having children was his way of giving something back to community and society.  The gist of it was that basically the aim was for the child to surpass the parent.  None of the parent’s fears and prejudices but all and more of their strengths and in that way, society grows and improves.  That was the important bit I caught from his conversation.  Part of that was for the child to go farther, learn a little deeper, experience a little more and come back more complete.

Growing up, my dad was a bit of a mystery.  He and my mum would work a lot and they’d leave, me, an 11-year old boy to look after his 7-year old sister in the house, alone.    So my sister and I had to grow up pretty fast on our own and look after ourselves.  But anyway, every so often I’d get glimpses into my dad’s way of thinking and this conversation I overheard was one of them.  Despite voting Conservative my dad’s quite socialist.  His outlook appears to be always on improving yourself as far as you can but with the aim of helping those around you and that effect rippling out to help a community, wider.  Dad may have started out by just wanting children for himself but I honestly think that later on he saw parenthood as more of a sociological responsibility and obligation.

I think about that from time to time.  But how does that even affect my learning to box? – I think ultimately whatever I tried my hand at, my parents wanted me to try as hard as I could.

There was never the lesson of “It’s not the winning that matters, it’s the taking part and having fun”.  I never, ever remember that lesson from dad coming in any way, shape or form.  His lesson was more: Take part, if you enjoy it, try and understand and study it more and practice.  Practice a lot. 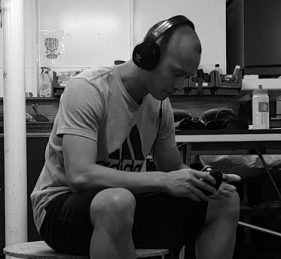 Musha shugyō (武者修行 ?) is a samurai warrior’s quest or pilgrimage. The concept is similar to the Chinese Youxia, or Knight Errantry in feudal Europe. A warrior, called a shugyōsha, would wander the land practicing and honing his skills without the protection of his family or school.